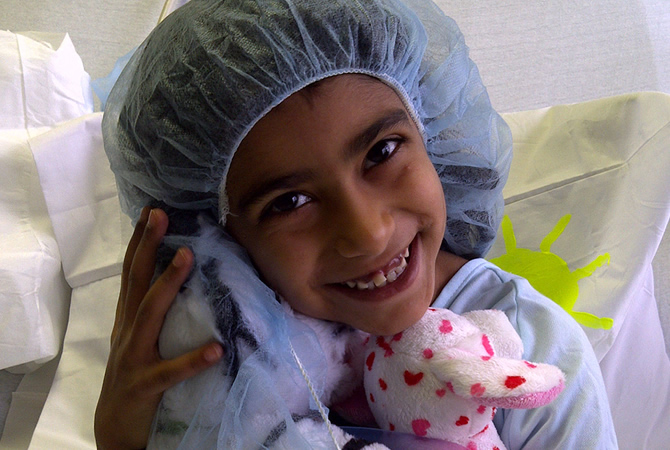 Nebal Al Shamali, a 6 year old girl, and her mother Ekram, arrived at JFK from Gaza on January 17th 2011.

In May of 2009, Nebal was injured in an accident at home in Rafah, the Gaza Strip. Nebal was 4 1/2 years old at the time, and suffered severe burns to her abdomen, pelvis, both thighs and lower limbs. Her mother attempted first aid and, when able, took her to the hospital. Since Nebal was not able to receive adequate surgical care in Gaza, her mother contacted the local social worker asking for help. The case was presented to the NJ Chapter of the Palestinian Children’s Relief Fund, who contacted Dr. Kaveh Alizadeh, who agreed to take the case on a pro bono basis. After crossing the Rafah border, and obtaining a visa in Egypt, Nebal and her mother arrived in Long Island and stayed with a host family for the three months they were in New York.

Surgery was conducted on January 28th at South Nassau Community Hospital in Oceanside, New York. She received extensive skin grafts and was released from the hospital a week later. She stayed on Long Island through April 4th of 2011. While Nebal was here she touched the lives of so many people. She visited the Jewish Day School where the children were thrilled to meet a Palestinian child their age. They played with her all day and wrote her beautiful letters upon her departure. I set forth below a letter written by the Assistant Principal about Nebal’s visit.