In one of Mission: Restore’s workshop conferences in 2012 at Nairobi’s largest referral hospital; Kenyatta Hospital, Dr. Alizadeh interacted with Dr. Peter Biribwa, a trainee, who was passionate about reconstructive surgery.  Impressed by Dr. Biribwa’s demonstrated enthusiasm and professional abilities, Dr. Alizadeh offered him the opportunity to study at the University of Nairobi under Mission: Restore’s sponsorship.  Dr. Biribwa was enrolled in the program at the University of Nairobi.  In four years, he was able to complete the studies, ready and dedicated to transforming lives of many through reconstructive surgery with Dr. Alizadeh as his mentor.  Dr. Biribwa has since trained tens of surgeons in Mwanza-Tanzania, Mombasa-Kenya and Entebbe-Uganda areas – surgeons who would, in turn, train the next generation of local surgeons and health professionals.  Dr. Biribwa has regularly been called to action in remote areas where transport, insecurity and medical infrastructure are non-existent.  He and the many doctors he has trained, have saved untold number of lives and brought smiles to families that had lost hope in life.  One such case, in a remote area in Mwanza-Tanzania, will forever remain etched in his mind as a partner surgeon with Mission: Restore.  He was called to attend to Joyce, a one-year old little girl, who was fighting for her life after sustaining almost 50% burns from hot water.  Her parents were peasant farmers and had hardly any money from previous harvests to help them pay for medical bills in a good hospital for treatment. 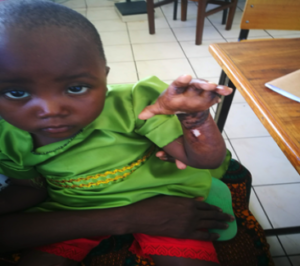 Joyce was not alone when the accident happened; she was playing outside with her neighbour where they hit a cooking pot with boiling water and both sustained serious injuries.  Her play-mate, Grace, did not make to live another day and Joyce’s parents had lost hope; so much so that the father had started to fundraise for her burial while she was still alive – a taboo in this community – but the reality of deceased Grace left the villagers with no faith but to start making burial arrangements for Joyce.  Joyce’s mother, Mary, was told of volunteers who offer reconstructive surgery for free to less fortunate communities.  She immediately asked for help and was guided to Bugando Medical Hospital which is a partner hospital with Mission: Restore. Here they met Dr. Biribwa and Dr. Phillip Makoye (a beneficiary of the Mission: Restore 2018 Grant) who performed a series of reconstructive surgeries that were able to put Joyce out of danger and back to a normal, productive life. 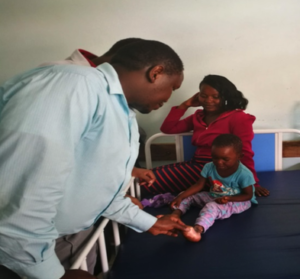